skip to main | skip to sidebar

September 24, 2008 French Postcards
A blogger on Libération’s Web site, Agnès Viard, reports that, in June, in Cahors, in the southwest of France, the mail artist Philippe Pissier (pronounced piece-Y¥) was being subjected to criminal investigation for having mailed a postcard of a bare-breasted woman, a nipple pierced with a safety pin, to a German exhibit of erotic mail art that had invited him to participate. After the assistant prosecutor Isabelle Ardeef began the investigation, Pissier was informed that he risked three years in prison and a fine of 175,000 euros for the crime of “disturbing public order and mentally endangering children by means of a pornographic work.” The following month, his computer and many of his works were confiscated, but the artist has remained without official word since then. As Pissier remarked, I am an adult, the mail sorters are adults, the mailman is an adult, and the addressee is an adult. I don’t see what the problem is. The local press has weighed in, heaping scorn on Ardeef for the inquiry. Giard reminds readers that such paintings as “Gabrielle d’Estrées,” by an anonymous French artist of the sixteenth century, is on open display at the Louvre, including to minors. “Le ridicule ne tue pas” (“You can’t be killed by ridicule”), the French say; but officials there would do well to remember that, in 1966, Charles de Gaulle’s regime was shaken by its (ultimately unsuccessful) attempt to ban Jacques Rivette’s movie “La Religieuse,” a misstep that definitively revealed the aged President’s incommensurable distance from modern life.

Labels: Germany, Hans Braumüller, Mail-Art Discussion, Problems, Who is next?

Just orderd this new rubberstamp. Symbolic for my life: It is changed by Mail-Art quite a lot. So why not share that with others. The rubberstamp still has to be made. I expect it in 2 days and will then start to use it.....

Is this a topic you can relate to? What changes have Mail-Art brought into your life?
Posted by Ruud Janssen at 1:11 PM 9 comments:

With the rate the postal rates have increased, the sending of mail-art by traditional mail has become quite expensive. The die-hards keep on sending mail-art, but a new generation still has to discover the postage Stamp.

Will Mail-Art be arround in about 10 years?
Posted by Ruud Janssen at 12:43 PM 3 comments:

This hommage to chilean visal poet Guillermo Deisler I did more then ten years ago. It was onew of my first experience with multimedia. Reactions please.

Sending out some collage-cards using glue I thought about archiving or conserving mail art.
I am quite sure that after two or three years the glue will not keep the parts together. As it will also happen to cards I've got. Now, do you take precautions? Do you re-glue cards of your collection?
Posted by Anonymous at 7:09 AM 4 comments:

Hello,
I just realized, that I sometimes become really impatient, waiting for the arrival of my send outs. On bad days ideas like "I should just post these cards with e-mail as computer scans instead of snail mail posts" come to my mind; and waiting for replies really nibble on my self consciousness ("Have I made sth. wrong?").
Well, on good days of course, I just think using snail mail is a good lesson to slow down in our fast world.
Best,
mischa
Posted by Anonymous at 6:51 AM 2 comments:

As I have noticed only few discussions take place here. It seems most mail-artists are busy with sending out and receiving mail-art and don't like to discuss the subject. No problem. The blog will stay online just to demonstrate that.
Posted by Ruud Janssen at 12:40 AM 6 comments: 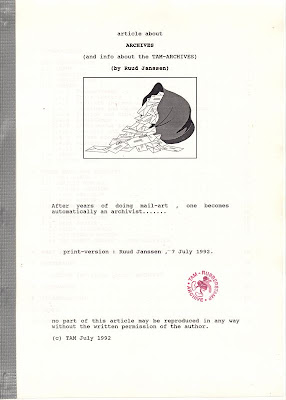 In my TAM-Archive I found this old article I wrote about Mail-Art Archives. It was then 20 pages long and I am rethinking this topic for a new version. What has happened to the mail-art that has been sent out all these years. Is it sold, brought to archives, still hidden in boxes, what do we know?

Any stories or things I should know on this subject?
After the summervacation I will start on writing a new text. I discovered some mail-art archives has moved into certains places, sometimes wellknown archives. But sometimes they are also sold (yes, people pay for the old mail-art of some wellknown people....)
Your thoughts?
Posted by IUOMA at 10:56 PM 2 comments: 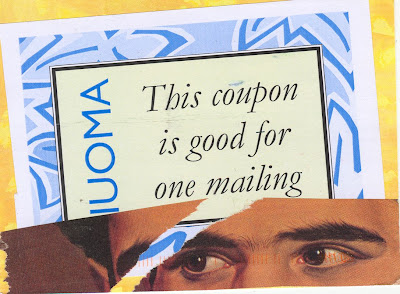 The coupons I send out have a specific topic they touch. Is mail-art 'guilt-free' as some Americans say? Does one decide to answer or not and is the mailing one sends out really free. Or is it that mail-artists expect an answer and think it is wrong not to answer a piece of mail-art they receive? reactions?
Posted by Ruud Janssen at 10:55 AM 2 comments:

I'd like to know how other mail artists "work": Do you produce daily / on the week end / from time to time, but focussed?

The background of my question is that often a "guilty" feeling starts when I don't make & send cards - mostly because my job eats me... From time to time I plan to make a card a day, as quick & dirty as I can, but at least I have cards to send. But then my "standards" come knocking and say: "You don't want to send this card?!?".

Well, how do you handle this?

Thanks for your response,

52) How much is the cheapest postage to send something to abroad?

I know that the postal rates have increased a lot over the years. The 'snail-mail' has become very expensive. The rates for the cheapest mail in the Netherlands are:

Just wondered how the rates are in other countries?
Posted by Ruud Janssen at 4:06 AM 5 comments:

Looking at the circulaire 132, I wonder if there is a special idea behind artwork using dimensions of 8cmx8cm?
Can you give me the origin and the significance of this?
Posted by Anonymous at 7:48 AM 3 comments: 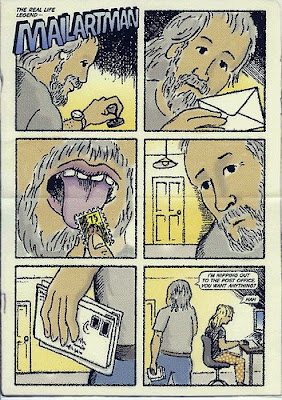 The mail is slow and takes time. The Internet publishes righ away and people can read all at the same time.... Do you spend to much time online and therefore don't send out as much as you would like to?
Posted by IUOMA at 10:06 AM 3 comments:

47) MailArt contains Inspiration and may be Addiction! 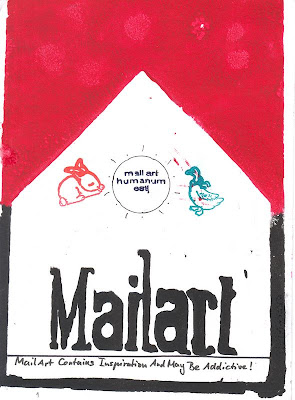 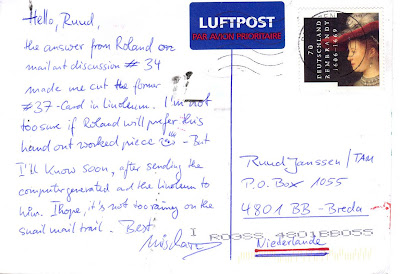 45) What is your passion in Mail-Art?

Why are you doing Mail-Art? With the electronic communication-ways some still prefer the handmade mail and keep sending things out. Why?
Posted by Ruud Janssen at 10:50 PM 1 comment:

43) Where is Charles François? 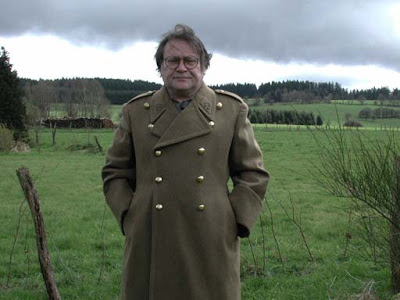 In the 80-ies I was in contact a lot with Charles Francois from Liege, Belgium. He used a modem and an Apple computer in the early years of communicating with e-mail. He har RATOS, I had the TBHS (Tam Bulletin Host System), and we were pioneers in these new fields where mail-art and electronic networks joined.
On the Internet I can hardly find things from him. His old website from the University of Liege has gone.... Does anybody know where he is or what happened?
The photo is from my archives (dates 15 years back I think).
Posted by IUOMA at 2:06 AM 10 comments:

To my knoledge in the last years there were only little publications on the subject mail-art. In the 90-ies there were some books written and published on the subject, but the new generations hardly knows about thee books. Also the accesibility of these book is low. They aren't available in libraries or bookshops........

What will happen. Do we need more books, will there eventually be more online that covers the area, or is there almost no new development in mail-art so books aren't needed? What do you think?
Posted by Ruud Janssen at 10:11 AM 3 comments:

40) Is Mail-Art more than Mail-Art Projects?

Sometimes I get the idea that most things I see connected to mail-art are Mail-Art projects. Just different themes, different sizes, deadlines, etc. Is Mail-Art only Mail-Art Projects for you (as a practitioner) or is it more for you?
Posted by Ruud Janssen at 11:31 AM 2 comments:

Mail-Artists that take part in the Discussion